Leaving the Grand Canyon, we were headed for Las Vegas and the airport where my pal would return to life in Nashville. I was headed for three days in Carlsbad, California to rest and visit some old friends from New Jersey and Brussels. Before getting to Vegas, we made a stop at Hoover Dam, a man-made wonder that I’d wanted to visit. We drove through the blooming Arizona desert, with red flowering prickly-pear cactus, ocotillo that was green but not quite blooming, and yucca plants ready to burst. It was like driving thru the imaginative town in the book by the same name, Roxenboxen. It was a family favorite, drawn so skillfully by Barbara Cooney and now I was enjoying miles of the Arizona desert in springtime.

Hoover Dam and the Mike O’Callahan-Pat Tillman Memorial Bridge exceeded expectations. We stopped first at the bridge which can be crossed on foot and gave a great opportunity to see the entire dam structure. Then we drove over the dam, crossing back into Arizona, parked and walked the expanse of the dam. Hoover Dam was opened in September, 1935 and was the work of several administrations including Hoover, Coolidge, Harding and Roosevelt. The facade as well as the statues in the plaza area, called The Winged Figures of the Republic, were Art Deco, reminiscent of their age. It is a structure that bogles the mind and inspires; stopping the natural flow of a powerful river with a lot of concrete and great engineering.

Las Vegas is not my ‘cup of tea’. I don’t gamble, I’ve never bought a lottery ticket, or participated in a March Madness bracket. My intent in Vegas was to drive The Strip and leave. Since my reference to Vegas is old Rat Pack movies, it was disappointing that the old Strip is torn down, but we did see the empty lots and wrecking balls. In addition, we saw several wedding chapels, including one with a bride, groom and attendants gathering for the big event. There were loads of people out, lots of shows advertising on billboards and one casino more outrageous than the next. When we passed by the Bellagio, the water fountains danced to Elvis belting out, “Viva Las Vegas”. It was good timing for us, we were stuck in traffic so we enjoyed the entire song/show, which was show enough for me. I decided that Las Vegas, while similar to Times Square or Piccadilly Circus, was really just the Ohio State Fair on lots and lots of steroids. There were hawkers and carnies, magicians and hypnotists, old performers finishing out their careers, and people of all sorts. And that was just on the street. 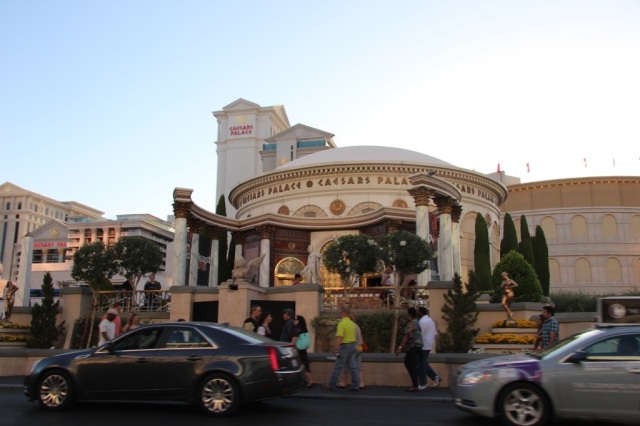