Leaving Portland, our intent was to follow the Columbia River Gorge for several hours driving the Historic Columbia River Highway, which was the first scenic roadway in America. We had stopped at the Albertson’s(grocery store) in Troutdale to get fixings for a picnic so we were ready to enjoy the blue skies and long drive to Lewiston,Idaho. Our first stop was The Portland Women’s Forum Scenic View(formerly Chanticleer Point). Standing at the overlook looking down at the wide Columbia River and the even wider gorge cut out of the Cascade Mountains, I understood I am often a visual learner. When I was kid reading about far off places, I was occasionally tripped up by geographic concepts. As instructed, I’d look up the unknown word in the dictionary. In this case, gorge: Noun–A narrow valley between hills or mountains, typically with steep rocky walls and a stream running through it. That definition wasn’t going to illuminate a kid sitting in an Ohio suburban town with flat terrain, no creeks or woodlands within miles and grid streets. Standing at the overlook, I understood clearly the meaning of the word, gorge, but knew the definition needed adjusted as narrow is not accurate when talking about the Columbia River Gorge.
The scenic byway was closed for construction work a mile further along, so we turned back and made our way down to I-84, where we cruised alongside the river and in the gorge. We stopped at Multnomah Falls, the highest of the many waterfalls on the Oregon side of the River. There was a lovely old visitor center, stone walking bridges, and lots of people taking photos in front of this, the 2nd largest waterfall in the United States. Shortly after Multnomah Falls, we crossed into Washington State to drive along SR 14-Lewis & Clark Trail Highway. The Washington side of the river was equally as scenic and at the National Fish Hatchery we watched wind-surfers and kite-surfers flying across the waves under the watchful eye of Mt. Hood in the distance.
At The Dalles, where for 10,000 years Native Americans met to trade goods, the land turned arid; gone was the green and fertile land of Eastern Oregon. There were a few wind turbines on the Washington side, but little vegetation along the river, hills and canyon walls cut out by the river.
The Columbia River turned north while we headed east along Route 12, also called the Lewis & Clark Trail Highway, through Walla Walla. The hills and fields turned a luscious green folding in upon one another. Driving through the green fields, up and down the hills was invigorating. Then we came upon fields stripped brown and green, like a painting in the distance. A most enjoyable ride. We stopped in the little town of Waitsburg at the local park and enjoyed our picnic. Though the town is very small, the store fronts were occupied and we saw several young guys out jogging, a reassuring sight of health for the runners and the town. During the final hour of the drive to Lewiston we enjoyed a top of the world feeling at Alpowa Summit and more river and canyon views as we came into Clarkston, Washington and Lewiston, Idaho along the Clearwater River. 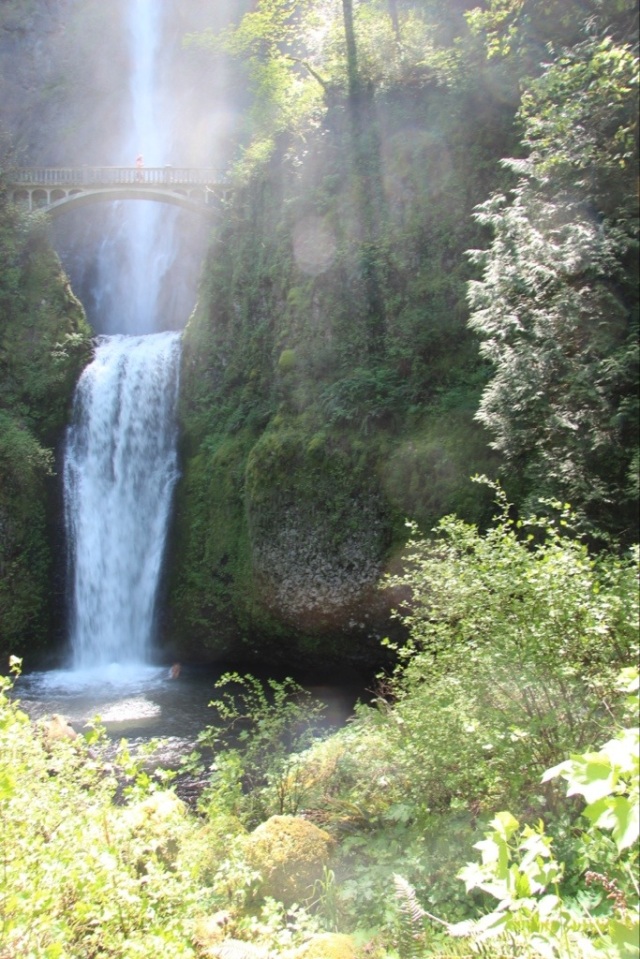 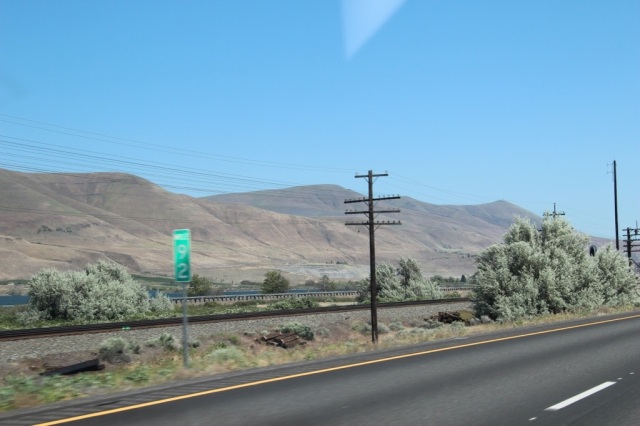 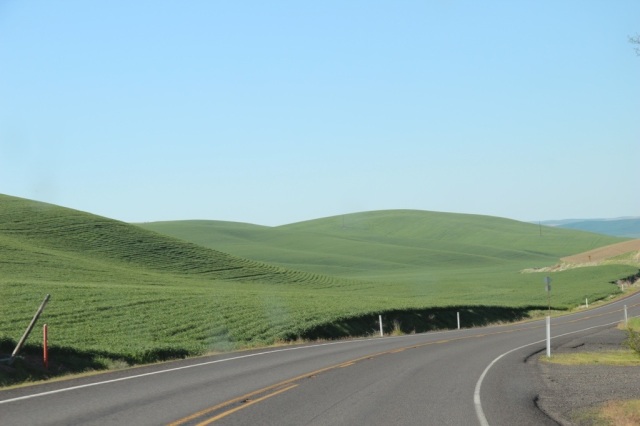