I couldn’t wait to get out of Missoula, my generally open-minded self was closed to the vibe of this town. I felt I had stepped back in time to an era of disheveled, long-haired, pot-smoking, college dropouts and my very negative visceral reaction to the place was irritating me. While I was analyzing my reaction and was ready to get on the road headed to Jackson Hole and a lovely resort for the evening, my husband was single-minded about getting a University of Montana t-shirt. He saw himself walking the streets of Southie in a maroon “Fear the Griz” t-shirt. Once that purchase was made, we headed east on I-90.

We ventured off the road about 45 minutes later to go to Garnet, a ghost town owned and managed by the Bureau of Land Management. Earlier in this blog, I mentioned that I was interested in visiting a ghost town and I was sure this would be my last opportunity. I wasn’t going to miss it. We pulled off the highway and followed the well-signed road towards Garnet. It was 10 miles from the highway, the first couple of which were paved. Around mile four the road forked, went from gravel to dirt and we encountered a guy who was using some heavy machinery to help maintain the road which was used the previous summer by trucks to haul dirt and rock from the area. He warned us that the road got rough up ahead, that there was an ascent up to the ‘buildings’ and that there might be mud and snow. We decided to continue on for a bit; we’d turn back if it got bad. Mile 5, 6, 7 and 8 weren’t bad, not unlike the many Michigan unpaved roads we’ve traveled. Then the road narrowed and we began a steep climb up a one-lane dirt road with switchbacks every quarter of a mile, tire tracks that turned into gullies at places, patches of mud and a sheer drop off the open side of the mountain. There was no turning back, so I accelerated my RAV-4 and we had an awesome ride up to Garnet. I was pumped up when we arrived even though it had started drizzling. I was already thinking about the drive down.

We spent about 30 minutes exploring the ramshackled town, which had its heyday from 1895 to 1912. The search for gold and other precious metals had made Garnet the home to about a 1000 people. The Main Street still had the hotel, a saloon, a store and a closed visitor center. There was a boardwalk along a couple of the buildings made by a local Eagle Scout. We could enter, at our own risk, several of the weathered down houses and they were complete with old bed springs, tools and debris left behind. My husband spotted a varmint or two that scurried under the buildings as we wandered about the town. We returned down the mountain on the same road rather than taking an alternative route that we had seen posted, figuring “better the devil you know than the devil you don’t”. It wasn’t a difficult descent and we were quite pleased to inform the guy we had encountered earlier that the snow was almost gone from the town and there were only a few patches of mud on the road.

The drive along I-90 and I-15 to Idaho Falls was a bit boring. Although we encountered a few signs and spots that made us ponder, like the sign for “Local Access” or the “Used Cow Lot”, mostly it was a dull ride. I had just the thing to break up the monotony, Tina Fey’s audiobook, Bossy Pants. While we both enjoyed the book, it was only I that laughed out loud so much that we had to occasionally pause the book so that I could catch my breath. Really, I found it that funny; maybe it was just being out in the middle of nowhere, but I was entertained by Ms. Fey’s reading of her work. We turned off the book as we headed thru the Teton Pass. At the top there was a tremendous view of Jackson Hole; unfortunately my photos do not begin to do it justice. I learned that a “hole” was a cowboy/rancher expression for a valley between two mountain ranges. Upon the advice from some New Jersey friends, we spent the evening at the Spring Creek Ranch. It was a lovely spot with unfettered views of the Grand Tetons and a great restaurant, The Granary. We were pleased with our meals, a filet for my husband and roast chicken for me, along with a bottle of Malbec, which has been my wine of choice since the selection of our new Argentinian pope. We spent a lovely evening chatting with several fellow out-of-state visitors, the main topic being whether or not the road going into Yellowstone would be open the following day. It had been a snowy winter and with the sequestration it was unknown if the plowing had been completed as planned. This was of interest to us, too, as we were to take the road into Yellowstone to the Old Faithful Inn the following day. 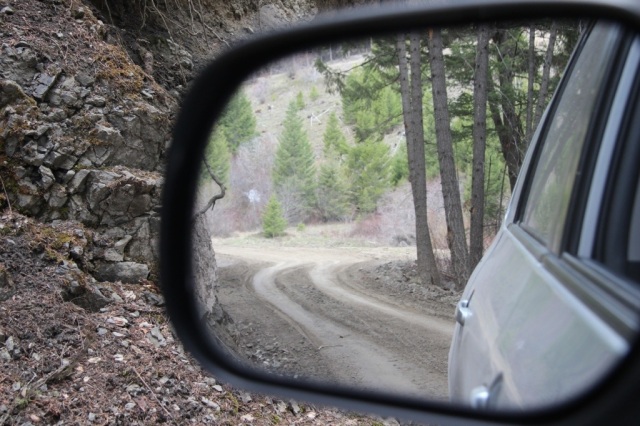 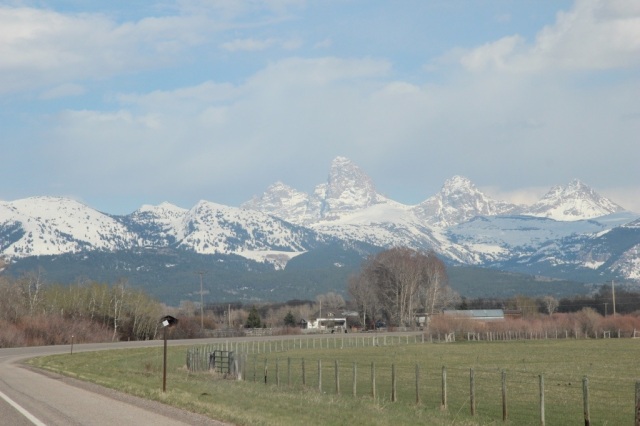